Oven Shopper is supported by our readers. When you purchase an item through links on our site, we may earn a commission.

An Inexpensive and Space Saving Microwave

I have done my best throughout the little creation you see before you to give people a good cross section of the types of microwaves there are on the market. After all the research I have done, it made me realize that not all models are created equally.

That is to say there are people who want an appliance like this in the kitchen that will practically replace the need for a conventional oven, and there are those who prefer to just have something simple that does what microwaves were originally intended for. 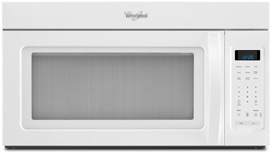 I have recently been taking a closer look at over the range microwaves (purely out of curiosity really), and happened upon the Whirlpool WMH31017AW 1.7 cu ft. Of course, what initially attracted me to it was the brand. After all, this manufacturer is well known for building electrical appliances that last and supply them at reasonable prices.

That’s part of the reason I have included it on my website but also I thought it deserved a place because of its simplicity (as you’re about to find out).

As I stated in the name, this over the range microwave has 1.7 cu ft of space which will easily accommodate the types of cookware you’re likely to use. It also has 1,000 watts of power output so items of food and liquids can be defrosted or reheated pretty quickly.

It goes without saying the reason this model is space saving is because it’s fitted over your cook-top which is perfect if you don’t have much in the way of countertop space in your kitchen. What I do like about this model is the way the vent has been designed.

It’s actually hidden which makes for an easier clean and it looks much better once it’s been installed. In fact, you can install it as vented or non-vented (re-circulated) which makes it pretty versatile in terms of installation needs. You also get charcoal mesh filters to help remove various impurities and grease from the air. These also help with removing cooking odors. The filters are replaceable and also dishwasher safe.

Oh, and you can also choose from two different fan speeds (just in case).

The microwave is available in white, black and stainless so you have plenty of choice depending on your current décor. It’s a basic design with nice clean lines so it will blend in to your kitchen well. There is a handle as oppose to a push button door mechanism in the same color as the microwave.

All the controls sit to the right of the door and you have an LED display which lights up in blue on a black background. The display will allow you to set a clock and of course, will display various modes when the microwave is in use. All the controls are a simple one-touch design which I like because there are no fiddly bits to clean.

As you’ve probably noticed, this microwave doesn’t have a lot of “bells and whistles” but it will still do all the jobs you would expect from an appliance like this. Along with the features I’m going to explain below you do also get a couple of handy one-touch features like popcorn, pizza and potato.

There are 10 different power levels but if you want to, there is a one-touch 30 second add button which can be used whilst the microwave is in use. You can also melt chocolate or soften butter in this microwave without any trouble because there is a special button for that as well.

This takes the guesswork out of how long it should take to melt something and stops what can sometimes be pretty messy accidents! The turntable inside is glass and removable for easy cleaning, and you also have an interior light that automatically comes on when you’re using the microwave or when you open the door.

This over the range microwave won’t cost you a lot of money. In fact I found a really good deal on Amazon lately so you might want to consider looking there if you’re interested in finding out more. It’s solidly built, will save space in your kitchen and its powerful enough to quickly reheat, heat and defrost.

Microwaves
Countertop
Convection
Over the Range